Trump administration chips away at Obamacare 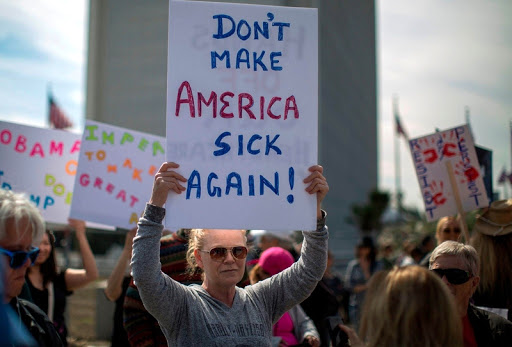 Last week, the administration released its latest proposal along these lines, by changing the definition of so-called short-term plans. These plans don`t need to follow any of the Obamacare requirements, including popular rules that plans include a standard set of benefits, or cover people with pre-existing conditions. If the rule becomes final, these plans could go from short term to lasting nearly a year or longer.

Taken together, experts say, the administration`s actions will tend to increase the price of health insurance that follows all the Affordable Care Act`s rules and increase the popularity of health plans that cover fewer services. The result could be divided markets, where healthier people buy lightly regulated plans that don`t cover much health care, lower earners get highly subsidized Obamacare - and sicker middle-class people  face escalating costs for insurance with comprehensive benefits.

But not everywhere. Several states are considering whether to adopt their own versions of the individual mandate, Obamacare`s rule that people who can afford insurance should pay a fine if they don`t obtain it. A few are looking to tighten rules for short-term health plans. Some states are investing heavily on Obamacare outreach and marketing, even as the federal government cuts back.

The result is likely to be big differences in health insurance options and coverage, depending on where you live. States that lean into the changes might have more health insurance offerings with small price tags, but ones that are inaccessible to people with health problems and don`t cover major health services, like prescription drugs. States pushing back may see more robust Obamacare markets of highly regulated plans.

Legislation to replace the individual mandate has already been introduced in Maryland and New Jersey with prominent sponsors. Political leaders in other states, including California, Washington, Rhode Island, Vermont, Connecticut as well as the District of Columbia, are weighing options for replacing the mandate this year, as Stephanie Armour reported in The Wall Street Journal. The mandate was designed to give healthier people an incentive to buy insurance before they fell ill, lowering the cost of insurance for everyone who buys it.

"Clearly, I think the federal administration and Congress are moving in one direction," said Brian Feldman, a Maryland state senator who leads the state health subcommittee and was the primary sponsor of mandate legislation there.  "And I think states like Maryland would like to move in a different direction."

Mr. Feldman and his colleagues aren`t planning simply to replicate the federal individual mandate. Instead, they are trying a new strategy. People who fail to obtain insurance would still be charged a fine, but they would be allowed to use that money as a  "down payment" on a health plan if they wished. Legislators estimate that many people subject to the penalty would not owe anything more to buy health insurance, after federal tax credits are applied.

Other states are hoping to mimic the expiring federal policy more closely. The board governing the insurance marketplace for the District of Columbia voted last week to recommend the adoption of an individual mandate replacement. Connecticut`s governor, Dannel Malloy, is considering a proposal by a Yale health economist.

Those plans are more similar to the Affordable Care Act`s approach, in part for expedience. The federal mandate is set to expire next year, and insurance companies need to develop their health plans and submit 2019 prices by this summer.

"The idea that a state would be able to stand up something, and put out any guidance, and advise stakeholders, and be able to do it by 2019, is pretty infeasible," said Jason Levitis, a former Obama administration Treasury Department official who has developed legislation to help states draft mandate replacement bills.

Imposing state-level versions of the mandate may be a political challenge even in blue states. But other strategies are in play, too. California is one of a handful of states considering a bill that would effectively ban the short-term insurance plans proposed by the Trump administration. (New York, New Jersey and Rhode Island already effectively block them.)

A number of states across the political spectrum are also considering policies that would provide so-called reinsurance funds, to help protect health insurers from rare, very expensive patients, and help them lower the prices for everyone else.

Alaska, Minnesota and Oregon have already adopted such plans. Washington, New Jersey, Maine, Colorado, Wisconsin and Maryland are working on proposals. Heather Howard, who directs the state health and values strategies program at Princeton University, said that reinsurance plans operated more like a "carrot" in stabilizing insurance markets.  They may prove appealing to a broader array of states, while the mandate, a "stick," may interest politicians only in the most liberal places.

Some Obamacare-averse states are pursuing policies meant to circumvent the health law`s rules for insurance, and broaden options for cheaper, lightly regulated health plans. Idaho has announced a plan to allow insurers to offer health plans that don`t comply with many of Obamacare`s core rules, and one insurer, Blue Cross of Idaho, has said it will begin selling such plans next month.
Was this article helpful? Yes -0  No -0  39  Posted by: 👨 Denise J. Krupa